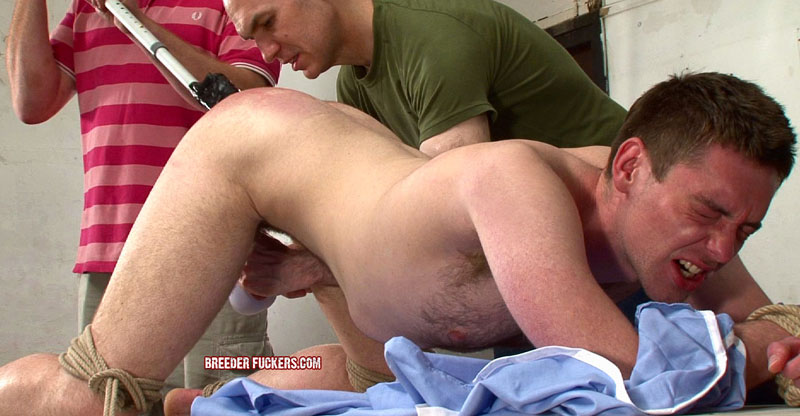 Watch the Full Video at BreederFuckers

Tattooed straight lad Dan is in real deep shit now. Dave and Adrian really have it in for him, maybe because he was a big Brexit supporter? Maybe Dan didn’t realize it was going to be lower income, working class stiffs like him that were going to be feeling the economic effects of leaving the EU the most, but now he’s gone and dragged Adrian and Dave down with him. It’s going to be so much harder for them to shoot porn now that Britain has chosen to leave the EU — it will be harder to recruit talent from the continent, and many fear that without the EU’s influence, the authoritarian, anti-porn, big brother stance of the British government will just continue to grow. Dan represents everyone that Adrian is mad at now, and he’s going to teach this uneducated dummy a few lessons.

Dan is filled with rage at homosexual men, naturally, and spits out threats and curses before Dave and Adrian bind his mouth. Now he’s just giving them evil glares, but Adrian wants him to feel his impotence and helplessness, much like the 48% of British voters who found their voice drowned out by populist demagogues spouting fear and bigotry to sway the uneducated public to vote “Leave”. Dave inserts an enema tube up Dan’s tight hetero hole and two liters of ice water flow into Dan’s guts. He’s squirming like mad now, trying to get the hose out of his ass but Adrian warns him to take every drop or there will be dire consequences, but probably not as dire as the contraction of British pensions. Dave and Adrian pass the cane back and forth, taking turns whipping Dan’s bare feet and bottom. Why don’t they each have a cane? Probably feeling their diminished buying power as a result of the lower pound. Dan can’t hold the water in anymore and he lets the enema flush out of him into a crummy old bucket. Now he’s clean and fresh and ready for a hard fucking. Adrian and then Dave take turns rutting with the scruffy lad and each unloads a big messy load of cum on his cock and balls. Does this fix anything? Probably not, but for now, primal emotional revenge feels pretty good. Click here to watch Dave and Adrian humiliate and punish their bound fuck-slave at BreederFuckers.

Watch Craig Take it Hard in the Shitter

Craig, the most popular boy at BreederFuckers is back and he’s slated for some nasty humiliation and painful fucking before his day is over. He’s spending this session strapped into the dreaded medical exam chair with his arms roped behind his head (sweet pits!) and his legs strapped into the stirrups and splayed wide. He’s naked except for a flimsy pair of white cotton undies, and those are just temporary anyway.

Dave gets the first crack at Craig, and he makes a lot of lovey-dovey talk to the strapped-in lad, but the tone soon turns dark and threatening. Dave starts probing Craig’s asshole through the white cotton, trying to get his finger in. Then he rips a hole in the cheap cotton and starts massaging Craig’s anus. Then Dave brings out a razor and bar of soap and starts shaving the stuck lad’s hairy asshole! What a lovely treat!

Finally Dave relents and Adrian steps up to carry out the next phase of Craig’s torture. He’s going to get an enema to turn that wretched cunt of his into a springtime fresh flower. Adrian inserts the tube and squeezes the bag and every last drop of water drains into Craig’s guts and he’s ordered to hold it — if he spills a drop there’s a nightmare waiting for him.

While Craig struggles to hold in the water, Dave starts whipping his ass with a riding crop. Normally I roll my eyes when they use this toy because it seems like they only tease with it, but Dave is really vicious with the crop today. He leaves a series of dark purple stripes across Craig’s ass from the harsh lashing, and Craig is yelping and whining through his ball gag, but to his credit, he doesn’t spill a drop of water from his ass.

Adrian wants his chance to inflict some pain, and get grabs the crop from Dave. With Craig strapped down with his feet in the air, his feet are irresistible targets. Adrian lashes the soles of Craig’s feet and the young lad twists and jumps, trying to get away, but he’s trapped and forced to endure the excruciating bastinado.

Watch the Full Video at BreederFuckers.com