Getting back deep into the Straight Hell vault we find Corey from 2009. He was a lost schoolboy, easy prey for Colin and Reuben who dragged him to the dungeon and put him through hell. But let’s go back to the setup first. One thing I really love about reliving these classic episodes is watching the elaborate setups used. For instance, Reuben starts as the focus of the video, playing the harried boyfriend trying to keep up with his uptight girlfriend on a lavish shopping spree. Shady Colin plays the sympathetic stranger who listens to Reuben whine about spending £500 and he’s not even going to get laid! Colin suggests he should try fucking lads instead…they’re so much easier to get get in the sack! That’s when the raunchy duo spy Corey, the most innocent looking schoolboy, looking lost and forlorn. Colin and Reuben offer to help him find his way and lead him right into their grimy dungeon playground.

Corey squirms and fights but he’s quickly tied up and gagged with his own necktie. Colin and Reuben grope his lean young body, twisting his nipples and tickling his armpits. They strip him naked and fondle his cock, clamp his nipples and start lashing him with floggers. Corey moans and struggles, but he cant break free. Colin explores his young slave’s cock and balls, pinching his nutsack with a tight clamp. These brutal fiends are getting ready to enjoy a nice long session with Corey, and they’re going to fuck him inside out while terrorizing him and putting him through endless pain. Click here to relive this classic Straighthell series featuring Corey’s BDSM torture at BreederFuckers.com!

Classic Corey is my favorite Corey. This young student earned the perverted pillaging of Colin and Reuben, not for being bad or wicked, but just for being in the wrong place at the wrong time when they were feeling like ornery pricks. Snatched off the street and taken to a deserted warehouse, Corey has been stripped naked and roped up. He’s forced to take his tormentors’ cocks in his hands and jerk them off until they’re hard. Corey can’t imagine what’s coming next. Reuben knocks the skinny lad to his knees and yanks his head back. Colin approaches with his stiff dick out, looking to fuck Corey’s sweet, wet mouth. One thing about Colin’s dick: I miss this cock. Such a great foreskin. I wish they could bring him back for a few new series.

I chose this classic StraightHell trailer less for the slave boy model Corey, and more because I was really missing seeing Colin, the ginger stud with the best foreskin I’ve been privileged to see on Straight Hell or BreederFuckers. The tawny bully is working with tag team partner Reuben to torture and defile whiny brat Corey, and this final session with the twinky college student leaves the wretch like a heap of wet garbage in the dungeon. 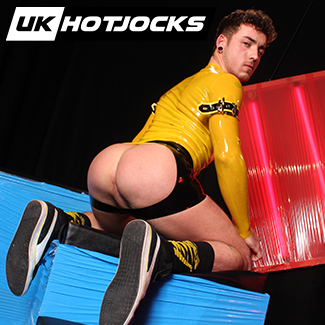