Another prodigal son returns to BreederFuckers after many years. Toby is squeezed for cash and answers a call for models at Adrian’s office. He still remembers his hellish experiences from so long ago, but he’s been told they need him for a straight scene.

His number is called and he’s led into the studio. When he asks about the women, Adrian laughs and corrects him. They are filming straight men, but there’s no women involved. Toby knows he’s been fooled again. Adrian strips him down and mocks him: Did he really think he would get to fuck women and get paid? Toby curses himself and Adrian, and the sneering tormentor starts his brutal work.

Adrian clamps Toby’s nipples and cock head with special clamps fixed with silver bells. He orders Toby to jingle those bells and he starts delivering sharp, painful blows to Toby’s wide bum with a wooden paddle. An idea strikes Adrian, wouldn’t Toby’s mates out in the lobby love to see their beefy mate humiliated?

Adrian was right. He parades Toby in front of the other models in the lobby and instead of offering help or even any sympathy, they are on him like a pair of crows, egging on Adrian as he whips out his cock and prepares for penetration. Toby’s face is etched with misery as he feels that old feeling of Adrian’s thick erection pushing into his ass. Adrian is not given to a slow, romantic reacquaintanceship. He pumps hard and fast, making Toby groan through his ball gag and the onlookers hoot and cheer. Adrian feels that triumphant crescendo in his cock and he pulls out in time to shoot his cum all over Toby’s fat bum. Toby’s misery is just beginning, but his punishment and submission are bringing joy to everyone who sees it. Click here to watch Toby’s brutal bondage fucking in his return to BreederFuckers.

Vincent’s training requires a harsh lesson in subservience. He’s uncomfortably bound with rope; his legs and arms are severely restricted. The overgrown school boy is made to play a cruel game.

Magnets are clamped to his perky nipples and his droopy foreskin. He must crawl painfully on his bare knees across the floor collecting bits of metal, bending down at each stop and inadvertently splaying wide his big meaty ass to show off his hole.

Adrian and Dave are returning to their scamming ways and broadening their horizons. They’s set up shop in a respectable office and they’ve placed an advert for a can’t miss executive sales training seminar. Surely they’ll get a few hungry up and comers naive enough to take the bait.

Lo and behold, one of the first suckers to sign up is Daman, barely out of college and looking very meek in his ill-fitting suit. He thinks he’s going to get the sales training he needs to put him in the corner office, but Dave and Adrian are seeing him as more at home in the corner of their dank dungeon.

They trick Daman into getting into a pair of handcuffs. Is he motivated enough to get out of them? While he cluelessly struggles, looking for a secret release button that isn’t there, Adrian and Dave start ramping up his humiliation and anxiety. They unbutton his shirt and then cut it off him. They rope his arms behind his back. Then they pull down his trousers.

The light bulb finally goes on for Daman. This isn’t a legit seminar at all! Now Adrian is massaging his long, brown uncut cock while Dave juggles his pendulous balls. Adrian says a straight cunt like him should be punished for flaunting that tight ass of his all over town, and that’s exactly what’s about to happen.

Dave and Adrian really did a number on poor Billy Rubens back in 2011. At the time, he was fresh off the boat in the UK, and timidly making his first forays into gay porn. Now we see him on sites like Eurocreme, Staxus and Hard Brit Lads, but when he hooked up with Straight Hell, he was wet behind the ears and had no idea what was in for him. Dave and Adrian were their typical selves: Cheeky, sarcastic and merciless. Good thing Billy is so young and so lithe — he needed his youthful flexibility to survive getting roped to a bench with his arms behind him. His naked, virgin ass was completely open for the Sadist Tops to explore and fondle and they really spared nothing.

Lazy Lee has been a leach on society all of his life. It was that slothfulness and idleness that made him both a target and so susceptible to be lured into the BreederFuckers dungeon. In this fifth episode in the painful gay BDSM series, Adrian has Lee roped with his arms behind his back and his thighs roped to his knees, forcing him to kneel. Adrian fixes magnetic clips to Lee’s nipples and a third clip is painfully pinched onto his foreskin. Adrian scatters a bunch of magnetic weights across the floor and orders Lee to crawl and wobble across the filthy carpet picking up the weights with his nipples and his cock. It’s an incredibly difficult task to perform with your arms roped behind your back, and to make it even more agonizing, Adrian is providing extra encouragement with a riding crop, lashing Lee’s back and bottom while he staggers on his knees trying to pick up the tiny weights with his nipples. 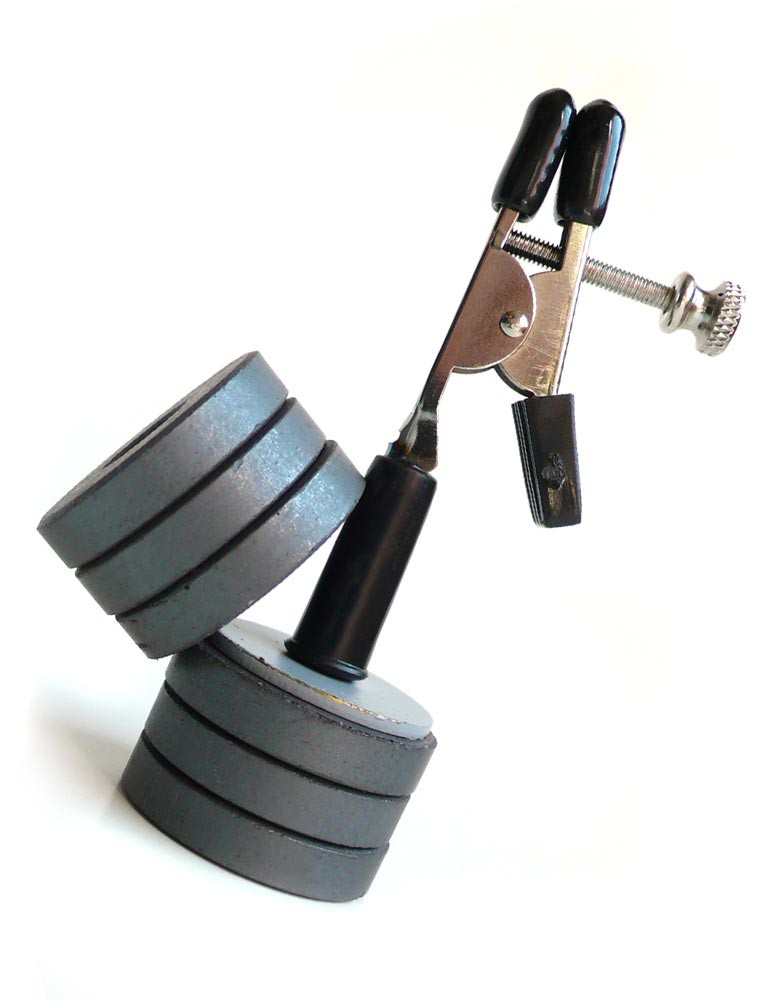 Buy Your Own Pair of Magnetic Nipple Clamps for just $16